"Global warming is spreading insect-borne diseases."  This was the headline of the May 12 Citizens' Climate Lobby Blog Post.  The Centers for Disease Control (CDC) recently released a report that found diseases spread by ticks, mosquitoes, and fleas more than tripled in the U.S. from 2004 to 2016, due largely to the Zika virus outbreak in 2015.  In analyzing this report we learn that:

A story from Newsweek on April 10 (Allergy Season 2018: Starting Earlier, Lasting Longer), citing a report by the American Academy of Allergy, Asthma & Immunology, claims that "as the climate changes and temperatures rise, the amount of pollen in the air and the length of time it stays there increase. This combination means worsening allergy seasons to come for many."

These are only a couple of the impacts on human health that climate change causes.  Believe it or not, there is still a government website that hasn't been taken down yet, that addresses these impacts: The Impacts of Climate Change on Human Health in the United States: A Scientific Assessment. The Introduction begins:

Climate change is a significant threat to the health of the American people. The impacts of human-induced climate change are increasing nationwide. Rising greenhouse gas concentrations result in increases in temperature, changes in precipitation, increases in the frequency and intensity of some extreme weather events, and rising sea levels. These climate change impacts endanger our health by affecting our food and water sources, the air we breathe, the weather we experience, and our interactions with the built and natural environments. As the climate continues to change, the risks to human health continue to grow. 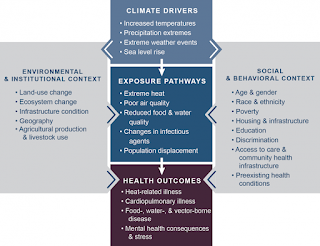 The reality of temperature-related deaths was demonstrated recently in Karachi, Pakistan.  See May 29 New York Times story, Looking for a Bit of Shade as Intense Heat Wave Hits Karachi.  Karachi is accustomed to heat waves this time of year, but this year in mid-May temperatures soared above 43°C (more than 110° F)!  The heat radiated from roads and cement buildings well into the night.  The heat spiked on May 18, just days after the beginning of Ramadan, when Muslims are required to abstain from food and water from sunrise to sunset.  The death toll reached 65 that day.

It's been worse.  In June of 2015, more than a thousand people died in the span of 2 weeks in Karachi.

Regarding food nutrition, a New York Times article from May 24, How More Carbon Dioxide Can Make Food Less Nutritious, reports that researchers in a new study find that increased concentration of carbon dioxide in the atmosphere is affecting the chemical composition of crops.  Not only do rising temperatures and frequent droughts damage harvests, but the extra carbon dioxide that humanity is pumping into the atmosphere is making some of our most important crops less nutritious by diluting their vitamins and minerals.  This latest study builds on an earlier one published in Nature in 2014, which found that elevated levels of carbon dioxide reduced the amount of zinc and iron found in wheat, rice, field peas and soybeans.

Beyond all this is the toll exacted on the mental health of the victims of extreme weather events.  There is the anxiety, despair, grief, and death that accompany hurricanes, floods, blizzards, and wildfires.  Who can count the tears witnessed on news reports of the October wildfires here in Northern California.  "We've lost everything!" is a lament repeated over and over.  Hurricane Harvey flooded square miles of the Houston area and caused the land to sink several centimeters.  Hurricane Maria killed over 4000 people in Puerto Rico during its rampage and aftermath.  Force 4 tornadoes rampage through the midwest causing death, destruction, and displacement.  Then winter comes with bomb cyclones, polar vortexes, arctic blasts, and more.  These extreme cold assaults are in fact a direct result of global warming, contrary to unscientific popular belief.  See Scientific American Earthtalk story: Why Global Warming Can Mean Harsher Winter Weather.  The devastation on ice-covered highways is only one source of loss and grief.

While it's true that earthquakes, volcanoes, and war (all of which can be indirectly caused by climate change) terrify, displace, and kill people, there is much less we as citizens can do about those.  But the disasters caused by climate change are within our power to mitigate.  We humans started the planet warming unnaturally, and we humans can stop it.

As was pointed out in the lead reference for this article, "people don’t often realize that climate change is already impacting us in adverse ways.  As a result, we tend to underestimate the urgency of the problem and consider it a low priority."  If you drop a frog into a pot of hot water, he will hop right out.  But if the water is cool and gradually heated to boiling, the frog will sit there, complacent, until he's cooked.

Let's not sit here on this planet doing nothing until we're cooked!

The Impacts of Climate Change on Human Health in the United States: A Scientific Assessment
https://www.epa.gov/sites/production/files/2016-06/documents/crimmons_climate_health_presentation062916.pdf