One thing about living on this planet as a human, that it takes a while to realize, is that it isn't forever.  I met John sometime over 60 years ago, I think.  When you've known someone for that long, it's hard to remember the details of your meeting.  I believe either Dave Buskness or John Ranney introduced me to John when we were 8 or 9 years old.  And I believe it was at Seventh Avenue Baptist Church here in Council Bluffs.  But I can't swear to it.

Anyway.  When most people are 8 or 9, they have little or no concept of death, especially personal death.  John and Dave and John Ranney who was a year younger than us, and Wink Longnecker, who was a year older, hung out together through high school.  It was in high school that John and I grew close.  We became like brothers… so close that we even fought like brothers sometimes.

Wink graduated first and wound up flying helicopters in Vietnam.  When John and I graduated, I went on to college and John joined the Navy.  After college, I joined the Air Force and eventually found myself also in Vietnam.  It may have been around that time that we first began believing in death.

John and I lost track of each other then for about a decade.  We both survived our military stints -- so did Wink -- so the thought of death visiting us personally faded from our consciousness.

When we reconnected, John and I were still drinking and smoking.  We did a lot of those over the next few years.  We were both living in Iowa back then.  We both married.  In John's case a couple of times.  :-)

I never met John's first wife, Ruth (until today) but I loaned John $125.00 to buy her a ring.  There were a couple more wives, Wanda and Julie, and finally Penny.  John was passionate about all his wives, but Penny was the only one who stuck with him through thick and think.  What love!

John got sober 33 years ago.  He was sober when he met Penny.  That may have something to do with their longevity.  I quit smoking 12 years ago, so I was a non-smoker when I met Sally.  And that definitely played a role in our getting together.

John met Penny through my first wife, Vicki.  Penny and Vicki were friends in school and had stayed in touch.  Penny married John on December 31, 1989, and that marriage lasted.  He finally got it right.

My marriage to Vicki ended less than 2 years after their marriage began, and John stayed with me.  I was single for the next 19 years, but John always assured me that "she's out there."  John describes Penny as his best friend.  And, true to John's prediction, I finally met Sally 8 years ago.  That's when I finally got it right.  Sally has become my best friend.

John and I lived in different parts of the country for the last 30 years or so, but a couple of decades ago, we started hooking up around Presidents Day.  Which often was about half-way between our birthdays: John's in late January and mine in late February.  It was mostly just John and me.  We did this to celebrate the anniversary of our 50th birthdays.  When we got together, I would drink and John would smoke.  We knew each other well enough that it didn't jeopardize his sobriety or my smokefreeness.

We have rendezvoused in Vegas, Reno, Albuquerque, New Orleans, and various other places.  In 2000 we went to Belize.  John brought Penny and his son Roy.  I was single then, so I got to room with Roy.  Then in 07 we went to Australia, with Penny and my then girlfriend Judy.  She had taught school Down Under about the same time I was stationed in Vietnam in 1972.  She showed us around her old stomping grounds.  That's where this shirt I'm wearing came from.  It was the 10th anniversary of our 50th birthdays. 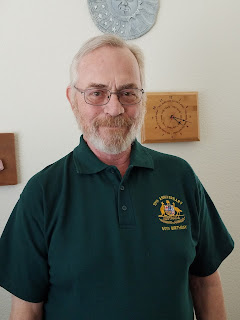 We had planned on getting together for our 20th, but John ran into a problem with his arteries, and we had to postpone.  Then, eventually, we had to cancel.

I did get to see him for our 21st anniversary, at his home in Colorado.  We went to Gunther Toody's.  That's the last time I saw him alive.  But I got to talk with him, laugh with him, touch him.  We'll resume our get togethers someday.

I now firmly believe in death.  But only as a gateway to a new life.

At my church during the Sunday services we have a time of silence.  During these few minutes congregants are encouraged to pray, meditate, reflect, or simply blank the mind.  It begins with the ritual ringing of the bell, and ends with singing "Spirit Of Life".

There are a few key words in that song that are deeply meaningful to me: "Roots hold me close, wings set me free!"  Think about that for a minute.  On the surface, this seems to be a dissonance.  How can one be held close and set free at the same time?

I have roots in the midwest: "family values", morality, work ethic.  And my wings have set my heart, my mind, and my soul free.  The incongruity of these two is resolved only by awakenings.  The theme for last Sunday's service was "Gradual Awakening".  The week before it was "Sudden Awakening".

I've had flashes of insight, epiphanies, numinous experiences.  For example, in 2002 I suddenly realized that anger is caused by fear.  This came after an incident of road rage on the freeway commuting to work.  It was several minutes before my kidneys could remove all the adrenaline that had flooded into my bloodstream.  But fortunately there was no physical damage that resulted to either of us angry drivers, and I had time to reflect on the incident later at my desk at work.

The truth that dawned on me and has stuck tight for more than a decade now, was that my sudden, hot anger had actually arisen from fear.  But what the heck was I afraid of?  That I might be late to work?  That somebody would make better time on the freeway than I.  That I might not be the best, most skillful, most efficient driver who ever took to the freeways of Northern California?  I realized that to address and treat my anger, I had to address and treat my fear.

That was a sudden awakening.  But a lot of the time sudden awakenings, conversion experiences, "getting religion" don't last.  Hence another of my favorite sayings, "Nothing good happens fast."  That's where gradual awakenings come in.

My roots, that is being grounded in the beliefs and values of my upbringing, hold me close.  And sudden realizations stick only when they conform to the basic structure of my being.  Yet wings: thinking outside the box, learning new things about the world, science, technology, or finding new experiences with people from other backgrounds, other cultures, other religions -- set me free to explore the Universe, both within and outside my own mind.

This is why I can claim that I am still adhering to the guiding principles I was taught growing up in a conservative Baptist church, while I embrace the wide, intellectually stimulating world of Unitarian Universalism.  I am, indeed, a follower of Christ.  And I'm no longer a fundamentalist.  I still believe that Jehovah is real, but that "Jehovah" is only a name I've given "him".  He could be The Almighty, She could be The Goddess, It could be the Universe.  It doesn't matter.  What matters is there is a Spirit that loves, that is benevolent, that is forgiving…. that is unafraid and therefore, never angry.  He, She, It is not vindictive, not jealous, never impatient.  In other words, something I want to be.

This, of course, requires me to reject the inerrancy of the Bible.  Narrower, more timid minds, those without the assurance that God loves them unconditionally and will never abandon them regardless of their "heresies", find this concept akin to "building a house upon the sand".  But in fact, it is the opposite.  The sands of Biblical interpretation, exegesis, and historical research shift with time and culture.  But "building a house upon a rock" requires something deeper than a superficial trust in a human-produced document with internal contradictions and clear fabrications, viz, inconsistencies among the Gospels, and the Old Testament reference to unicorns.

The faith that was planted, has grown, and is maturing in me sustains me through every delay, detour, and dead-end I encounter on my path.  I fear neither disappointment, disaster, nor death when I'm at my best.  I'm not always at my best, but even then I don't despair.

My roots will always and forever hold me close, while my wings set me free!!

Posted by Randy Jones at 9:01 AM No comments: